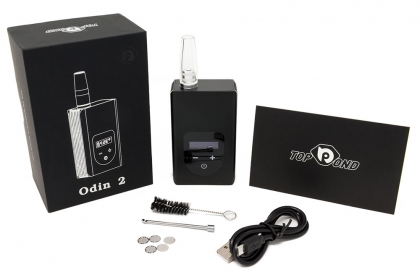 The TopBond Odin 2 is a multifunction vaporizer made for herbs and oils. The vaporizer features a convection heating method and a large chamber. It came with touch screen controls, which is rare in vaporizers. Other than the excellent touch screen function, the upgraded version of Odin vaporizer has more to offer.

The TopBond Odin 2 is the successor of the notorious Odin vaporizer, which is known as a great device. It seems like TopBond decided to improve its existing vaporizer for good. Do not be fooled by the sleek Odin 2 design. It is more than a version improvement and changing of plastic to the metal casing. Other than that, the Odin 2 comes with touch screen controls, a wide range of temperatures, isolated air-path, and long battery life.

Built
The Odin 2 looks very much the same as its predecessor, the first Odin vaporizer. But, it is smaller than the original. The noticeable upgrade of the vaporizer is the change of the control buttons to the touch screen. Another noticeable difference would be the sturdier casing, which also improves the look.

The upgrades
First of all, the vaporizer features a large battery with a 3200mAh capacity. Thus, providing an extended usage that allows you to bring it outdoor more and to share it with anyone you like. The Odin 2 also features an upgraded tapered glass mouthpiece that fits 14mm female water pipe without an adapter. Otherwise, you may purchase an adapter to install it to any water pipe.

The similarities
Both Odin vaporizers come with full temperature control and a three-button control. It remembers the last temperature used, so you don’t have to raise it from 80°C all over again. You can also switch from Celsius to Fahrenheit or vice versa when you press the “+” and “-” buttons simultaneously. Other than that, the secret mouthpiece compartment feature, haptic feedback, and isolated air-path stay the same.

In the following video, you will not only see how to use the Odin 2 best but also learn what makes this vaporizer unique.

The Odin is a discreet-looking vaporizer made especially for dried herbs. This pocket-friendly vaping-device comes with a water pipe adapter that will ...